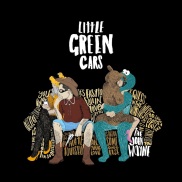 Little Green Cars played to a crowd of avid fans and enthusiasts, in the quaint Iveagh Gardens on a wet mid-summers evening in Dublin. Gradually, the rain clouds vanished in time for the spirit to return to the crowd at the picnic styled venue. Support came from popular act Gypsies On The Autobahn who were well received, and folk musician Lisa O’Neill with her band. O’Neill’s heavy hitting songs punch hard at times, but still she is a fascinating, and clever musician – one to continue watching.

After a successful 2013, Little Green Cars had gigs across the US and UK, even breaking into the US charts (Top 20) with their meticulously planned album “Absolute Zero”. Stepping onto stage, they began with the unknown “Good Women Do”, and the amazing song “Angel Owl” followed – such a powerful and enigmatic opening. The band were dressed in black or denim and cottons, and appeared unified facing the crowd in one line.

Stevie Appleby led with strength and finesse, it is hard not to compare him with Win Butler of Arcade Fire. As for the rest of the band, Dylan Lynch, Donagh O’Leary and Adam O’Regan, they all looked comfortable, playing flawlessly – almost the same as the record. Faye O’Rourke’s voice has such a haunting quality, she is hypnotic and so hard to compare her to anyone else. Pulling out her guitar during “Harper Lee”, she’s more than just a side vocal in the group.

“Harper Lee” was followed by “Mom and Dad” with its deliciously, dulcet harmonies that were drank up by the crowd. Punters were shouting encouragement to them and having a great time regardless of the blustery evening with spots of rain. “Please” had beautiful touches on drums while Appleby and O’Rourke stunned us with their vocal range.

This was happy and sad day for Appleby, who’s favourite band the Ramones lost its last musician. The crowd were asked to sing “Hey! Ho! Let’s Go!” and they moved on. Appleby also read a poem to us, it was about how things were very different when he was a teenager – he was unhappy with his life then, but so happy he held on because ‘dreams can come true’. A lovely, moral message to people about continuing in pursuit of their hopes and dreams.

It was between “The Kitchen Floor” and “Goodbye Blue Monday” that a change would have been welcomed, perhaps some theatrics or unusual stage lighting, but majority of the act remained static from this point. Ending on the “My Love Took Me Down To The River to Silence Me”, they exited the stage, only to return for some more with “The Factory” and a masterful rendition of “The John Wayne” Song, this is what we were hoping for all night.

Little Green Cars are still relatively new to playing larger live arena game, so we will let them off lightly. However, as they grow, there will be expectation to really entertain, to tell us the stories behind some of the songs, and to really let loose on stage. No doubt they will rise to the challenge.

A great show and I am curious in what the next album and years will be like for the band.