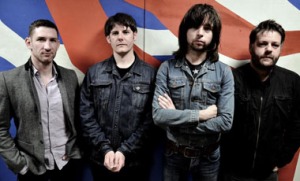 Keith Moss and the Tightrope Walkers played upstairs in Whelan’s on Friday night for the launch of their debut album ‘What Eludes You Moves You’ off Reekus Records label. Whelan’s upstairs was packed with Keith & Co’s fans, mainly female, who were jammed up front to catch a good look. Support on the night came from post-modern punk infused act Common Wolf and industrial alien-pop duo Nanu Nanu, setting the scene, emphasising Moss’s vast musical influence.

Keith (IMRO Young Songwriter Of The Year) and his band the Tightrope Walkers opened to “Rose with Thorns” where they eased us in with their serious hook driven melodic-psychedelic pop sound. Next up they went straight on in with “Torture in Paradise”, their latest infectiously, catchy single. Moss resembles a cleaned up Dylan Moran, and to add to the musical comparisons, 60’s and 90’s musical influences could be heard all night, ranging from The Beatles and The Charlatans, minus the keys.

“1991 (That’s Where You Are)” received tremendous respect across the crowd. In between Moss enjoyed some quirky banter with the audience, he’s funny and very fitting against the rich psychedelic backdrop. Lyrics and stories inform his material from Serial Killers (The Zodiac) to the bizarre from ‘thunder to dwarf eating hippopotamuses’. Followed by “Shouting To Be Heard” with its gorgeous guitar melody.

Called back for more songs after leaving the stage, they played their single again to a roaring crowd, ending with Keith showing his appreciation of his supporting acts and highly, talented band members. Overall, a strong performance.

Keith Moss and The Tightrope Walkers are nice and catchy, so go follow if psychedelic pop is your thing. ‘What Eludes You Moves You’ is out now.

Review by Áine Byrne
In association with Dublinconcerts.ie