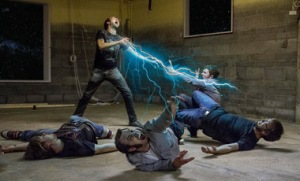 “Probably Not our last EVER gig”… post-punk band Bats attacked Whelan’s last Friday night, so not just your regular gig. A night of heartfelt bedlam was off to a fine start with support from Croupier and Jogging leading up to Bats, created to remind us of their musical portfolio and legacy.

Croupier kicked off to a full house and positive response with strong instrumentals similar to ASIWFA and The Red Neck Manifesto, Richie Egans bass legacy lives on. “Spector” is worth listening for its fresh beats with some interesting nue-wave influences on the vocal.

Next up Jogging began franticly, managing to smooth over sound issues with their flawless, niche sound which grabs you by the scruff of the neck, very hardcore indie rock. Themes behind their latest music offering involves “rearranging social structures, the aging process, and the effects of living out an extended teenhood”. Check out “Cleft Chin, Good Heart” for its heavenly scratching riffs, a specific sound that stabs you in the chest.

Bats hit the stage relentless and blasting out their tunes to a roaring crowd, sweat dripping off foreheads and condensation running down the walls. Bats very popular on the Dublin music scene have a strong following from the post-punk indie scene. Over the years, Bats have developed a strong musical legacy of an EP Cruel Sea Scientist (2007) and two albums The Sleep of Reason (2012) and Red In Tooth & Claw (2009) produced by Kurt Ballou (Converge).

Like laser bullets, smashing and trashing around at the speed of light, their songs quickly grow on the average post-punk fan, but for myself personally I found it hard on the head.  Laden with some extravagant sci-fi lyrics “We would do well to accept that this universe was not built for our benefit”. They nailed their intricate, highly technical anthems to all of the punters ears with a cutting sound similar to Neurosis. Stand out songs from them were ”Stem Cell”,  “Wolfwrangeler” and “Astronomy Astrology”.  The crowd rocked and lapped up the sound in Whelan’s jam packed room.

Whether you’re a post-punk indie or metal fan, at times Bats are surprisingly melodic and poetic. If you enjoy this style their legacy should be investigated and is even worthy of some dance moves. Some supporters definitely voiced their delight and preference for their move heavier sound. Not really my taste, I’m afraid or for the fainthearted, however, if this is your thing, go get on Bats.