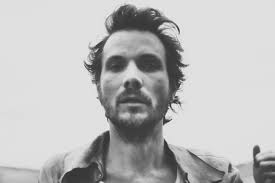 American singer Simone Felice and band came to town on Tuesday night, fresh off their tour of Europe, into the welcoming arms of an adoring audience at The Workman’s Club. Support came from the perfectly fitting HERM, by Kev Connolly and guests. Simone Felice where have you been hiding?Felice and the band were striking in appearance and work so well together in this ideal choice of venue.

Opening in harmony “there is no place for blood in this town”, the band commands us, reaching down and touching our cores. Moving on astounding the crowd, Felice’s voice, that voice would bring tears to your eyes, delicious sounding like Eddie Vedder and Cat Stevens so beautiful live. The crowd were constantly and continually hollering to him in respect. His command on lyrics was relentless for example in “So make my Lilly white lover, oh and oh my brother, never make the cover of the New York Times.” His words and voice eclipse thoughts in your mind. They move from playing Jimi Hendrix style guitar solos to Josh Homme rolling style drums, but over all quite like The Raconteurs.

Felice’s stories behind the music range from being influenced by Ernest Hemingway, addiction, birth to being close to death, which Felice knows a lot about. At 12 he was pronounced dead of a brain aneurism, but miraculously returned to life after almost ten minutes on the other side. In 2010 a heart defect of his aortic valve has left him living on 8% blood supply to his heart and brain, since he has spent his life devoted to music, literature and poetry.

Stand out songs from Felice and his band was the song for his mother, because she always asks why he writes songs about death, loves lost and sex, to drugs, more loss and finding love again. “You and I Belong” about his daughter Pearl, who was born during a thunderstorm, is just mesmerizing. Then he shared old-school fusion rock tune “Radio Song”, quite like The White Stripes, this song just rocked us to the core. Take some time to listen to this song “Courtney Love”, sublime.

The feeling in Felice’s voice, while he scanned the room looking into our eyes, is simply indescribable. Felice’s music touches your soul as he could fall down and die at any given moment, a reminder to us all the life is fleeting. Everyone should know about Simone Felice, we screamed and yelled in appreciation at the end and who cares, this man is a legend he deserved it. It was a joy to experience Simone Felice’s talent and his wonderful, wonderful band.